All wired up, hooked to the ceiling, and almost ready to start the running part of the study after at least 3+ hours of prepping for it.

This past Saturday I got to be the test subject for a study being conducted at Regis University in Denver. I was their first amputee subject, so I got to be the guinea pig (which tends to happen a lot in my life). This particular study was gathering data to show the differences between running on a walking prosthesis versus a running prosthesis. They were testing muscle firing, so I had electromyogram (EMG) sensors stuck on various parts of my body. They were also looking at biomechanics, so I had LED sensors stuck all over me as well. Once they got all the gear on me, I looked like a human Christmas tree.

One of the things I have definitely come to learn through my experiences as a test subject is that science takes time. The sensors didn’t always get picked up by the computer, etc., so we had to stop and readjust numerous times. Of course the sensor that gave us the most difficulty was the one on my right gluteus maximus, so one of the students kept having to reach into my running shorts to adjust/replace those sensors – poor girl! I was there from 9 am to about 1:30 pm, and ran less than 5 minutes during that time even though the entire purpose of the study was to look at running gait. The students were extremely thankful that I was “nice” and “patient” – something they pointed out more than once, which leads me to believe that not all of their test subjects have these qualities. 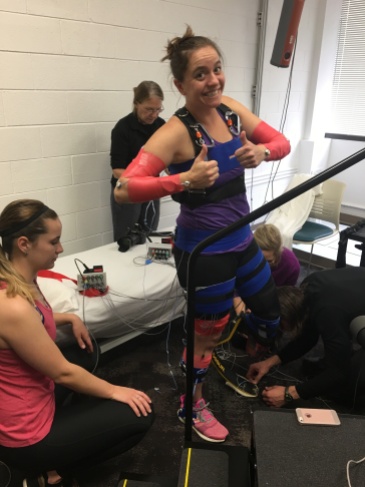 I have enough wires to work for the FBI or CIA, but they’re not hidden very well.

Every time something happened to extend our time together or there was something awkward about the study (like a student having to reach down my shorts), I simply stated, “It’s for science,” and I meant it wholeheartedly. Practical studies like this are extremely important for getting insurance companies to pay for running specific legs more often. Although we all know anecdotally that it’s much better to run on a running prosthesis than a walking prosthesis, this research will lead to a published study that will have real and undeniable data showing the harm that can be caused by running on a walking prosthesis. Having this published study to cite will be a great tool for prosthetists who work with patients who want to run. So, no matter how awkward or time-consuming a study may be, it’s all worth it in the end… for science.

Side-by-side shot of me running on my walking leg and my running leg.