One thing I remember clearly from my first race – the Bellco Colfax 5k – in 2013 is how utterly exhausted I was upon finishing. Zach and I went to Denver Biscuit Company afterwards and all I really wanted to do was take a nap (even before devouring my sleep-inducing biscuit with sausage, maple syrup, apple butter, and a fried egg). I had just started running about 2 months before, and my pace of 11 minutes per mile was the fastest I had ever run that distance before. I was super proud of myself for what I had accomplished.

If you had asked me back in 2013 whether I thought I would ever run a half marathon or hold anything faster than a 10 min/mile pace for anything longer than a mile, I would have laughed at the thought and moved on to a new subject. However, time has shown that the 2013 version of myself was utterly and totally wrong because that 2013 version of myself discounted the value of hard work and determination. 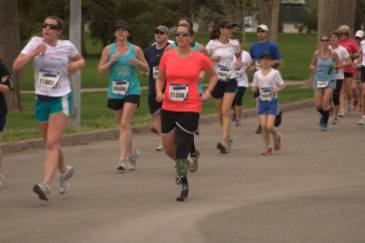 Fast forward to 2017, and just last month I ran the Cherry Creek Sneak 5k at a 9 minute per mile pace (2 minutes per mile faster than I was in 2013?!). Emily of 2013 would never have believed this was possible in a million years. Then, to show 2013 Emily how wrong she really was, I ran the Colfax Half Marathon in under 2 ½ hours this past Sunday. The work I’ve put in to getting faster at shorter distances has been physically painful, but my journey to be able to hold a steady pace for 13.1 miles has been a huge mental challenge.

My goal since 2015 has been to run a sub 2 ½ hour half marathon (which would be a piece of cake for some people and fast as lighting for others – the point of this post is NOT to talk about what is fast or slow, but to celebrate the value of persistence and hard work). In October of 2015, I ran the Rock ‘n’ Roll in Denver and missed my goal by less than a minute. Then, in 2016, I ran That Dam Run in Denver and was on pace for the first half (all downhill) and then struggled to get back to the top of the dam and finished in just over 2 hours and 40 minutes. Three days later I got the flu and that turned into bronchitis, so it was a bad race for me in multiple ways. 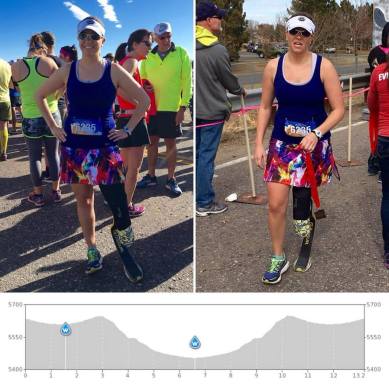 The highlight of 2016 for me was finishing the Coeur d’Alene Half Ironman, but I didn’t even go for speed because my goal was simply to finish. Two and a half weeks later, I crashed my bike and broke a rib, landing me on a no exercise restriction for nearly 2 months. Itching for a race, I ran the Rock ‘n’ Roll Half Marathon in Denver that October, and it took me over 2 hours and 50 minutes to finish. It was probably the most painful race I’ve ever run and I wanted to quit around mile 6 because my fitness had suffered so much due to the rib injury.

One thing that has been consistent for my half marathons is that I’ve had to walk and/or stop to stretch out my left glute muscle (it seems to have to work harder to advance my prosthesis forward). This was true of the Rock ‘n’ Roll in 2015, and part of the reason I missed my time goal for that race. However, I stuck with it and never let the fact that I missed my goal so many times stop me from trying again. All that hard work finally paid off this weekend when I not only ran the ENTIRE half marathon (didn’t even walk through aid stations and no stopping to stretch), but I finished in 2:24:39 and got a new personal record by about 6 minutes and crushing my goal to run a half marathon in under 2 ½ hours. This was a huge accomplishment for me, and it’s so important to remember all of the hours that went into achieving this goal. For a year and a half I have been haunted by missing my goal by less than 1 minute, but this weekend I finally got redemption!

So, my friends, remember that the people you see achieving their goals and dreams are not doing so by chance, but because of the time and effort they put into it that nobody sees – work hard, be persistent, and you just might surprise yourself with what you can achieve!