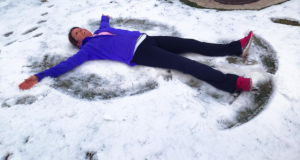 I am Michelle. I am an able bodied member of LIM359.  Dr. Franklin invited me to assist herself, Emily H and Whitney in the beginning phases of LIM 359. It has been exciting to help them get the ball rolling because I knew what a great resource this would be. There have been many people in my life that would have benefited from this group.

One of my best friends growing up had Muscular Dystrophy. Troy had the best outlook on life.  With me in tow I walked and he drove his electric wheelchair, mile after mile in our own quest for the Holy Grail. Our Holy Grail was to fill the boot of one of the many firefighters who collect donations for MDA every Labor Day.  I never personally saw him walk but my sisters did.  My memories of him are in his manual wheelchair, then on to electric and finally one that fully reclined and had a controller that allowed him to operate his chair with his mouth. The disease ravaged his body but in all the years I knew Troy, there is not one time I can recall that he ever complained. He rejoiced when he went to camp and got to dance with his friends. I was always excited when he came home from camp to hear his stories. It was such a wonderful resource I remember always being happy he had that available to him.

Troy never had the opportunity to achieve his goal which was simply to live until a cure for Muscular Dystrophy was found. His “expiration date” was the age of 17. He lived until he was 24. The support of his family was amazing. Not many people will ever endure what they had to do to support him in living beyond his expectation. “Disabilities” affect more than just the individual that is physically challenged. They require the love, assistance and support of their families and friends. To this day I still make sure to deposit what I can in the boot for MDA and collect my sticker from the Firefighters. Each year they not only come closer to a cure, but the money raised also assists in sending children to camp.

Kelly lived across the street. She was run over by a tractor by her father. Even though she was paralyzed from the waist down, she was a powerful force. She would ride her wheelchair up and down a city block in a wheelie. Then, plop out of her chair and into the grass and watch the neighborhood boys take her chair and attempt to ride a wheelie in her chair at all.  Nobody ever beat her record. Kelly was married and she and her husband started “Bear Steam Cleaning” which is still a successful business in Colorado.  Every time I have hired them, they have had employees who care about their job and the service they provide. Kelly would be proud.

Neither Troy nor Kelly ever complained about their situations. They embraced life… I was so young in knowing them that I did not appreciate the gift they provided me but in my adult life I understand what remarkable individuals they were and how fortunate I was to know them.

My Uncle Harry and Aunt Helen were also very important foundations in my life that inspired me. My Uncle Harry was in WWII.  He lost his right leg by stepping on a land mine. He never discussed his injury and I never knew his full story until he was in his 80’s. He had his prosthetic leg for so long that he had to have reconstructive surgery on his left ankle due to “wear and tear”. My mother, sister and I went out to Arizona for the surgery. That is when we found his scrapbook.  My uncle was awarded the Purple Heart because he would not allow his troop to come to his aid. He knew they were at risk so he carefully backed himself out of the mine field to safety.  The communication of the time was telegraph. My aunt was informed that he was in a hospital “stop”. No other detail. She waited for over a month before she knew where he was and if he was alive or dead. Had he allowed his troop to get him more quickly he would have only lost his foot. He ended up being a below the knee amputee because of the time it took him to retreat from the mine field. He recovered and went on about their lives only to discover that my aunt was unable to bear children. Due to the laws of the time, they were unable to adopt because of his “disability” (it did not matter that he was disabled due to serving our country). My aunt and uncle’s misfortune happened to be a benefit to my sisters and myself. They were an integral part of our lives as we grew up. They had a cabin in Netherland, Colorado. When we went to visit them, as children of a single parent household, we had the opportunity to be children. We played many games during our stay and their cabin was always filled with laughter.  We were able to enjoy the black starlit sky and the sounds of the river flowing alongside the cabin. Skip rocks, hike and run around without a care.  Again, never to hear a complaint from the problems they endured, but always praise at our manners and encouragement to follow our dreams and never doubt our intelligence and talents.

Throughout the year I have served on the board, I have had the opportunity to be a part of a group that is available to enrich people’s lives. I have met amazing individuals through the group and I am proud that I have been able to be a part since inception.  I have heard the many stories that have brought our members together. Once again, I find I am so blessed to have so many amazing friends.