Two Saturdays ago, I was finally able to attend my first Frozen Dead Guy celebration in Nederland, Colorado. Unfortunately we couldn’t get up there until about 5pm and most of the events were over but I didn’t care, it was an adventure.  We tore down the winding mountain slopes and parked in front of a cute train carriage coffee shop.  Once we had some hot, caffeinated beverages, we started to stroll down the path towards the festival street and immediately hit some impediments.  The sidewalks were completely iced, so I did my usual *shuffle like a grandma* walk and kept going.  I figured that with so many people there, the pavements couldn’t possibly be that bad.

Boy was I wrong.

I watched as 3 people slipped on the same huge patch of ice.  One girl stopped to help a guy up and then slammed hard onto the ground herself.  I sloshed straight through a muddy puddle rather than even attempting the slippery surface.  We made our way under the bridge and up the hill and I almost fell myself.  I passed a girl sitting on a rock, holding a blood-soaked tissue to her face whilst explaining to the police that she had just face-planted into the concrete and that was when I started to get worried about being there at all.  With my arm still splinted and healing from surgery, I couldn’t risk a fall.  I shuffled across the street, looked around and saw nothing but a minefield of ice-encrusted surfaces.  We managed to hobble into a couple stores, take a peek at the Dead Shed, and then we decided to leave before the sun set and everything completely froze.

Walking on ice as an amputee can be extremely difficult.  It’s one of the only things I have found few ways to improve.  I have practiced walking, climbing, jumping, running, and I have gotten better, but the moment I step on ice, I am back to baby steps.  With no foot or ankle to stabilize pressure on a frosty surface, if you slip, you’re going down.  I can’t even imagine how hard it must be for above-knee or double amputees. 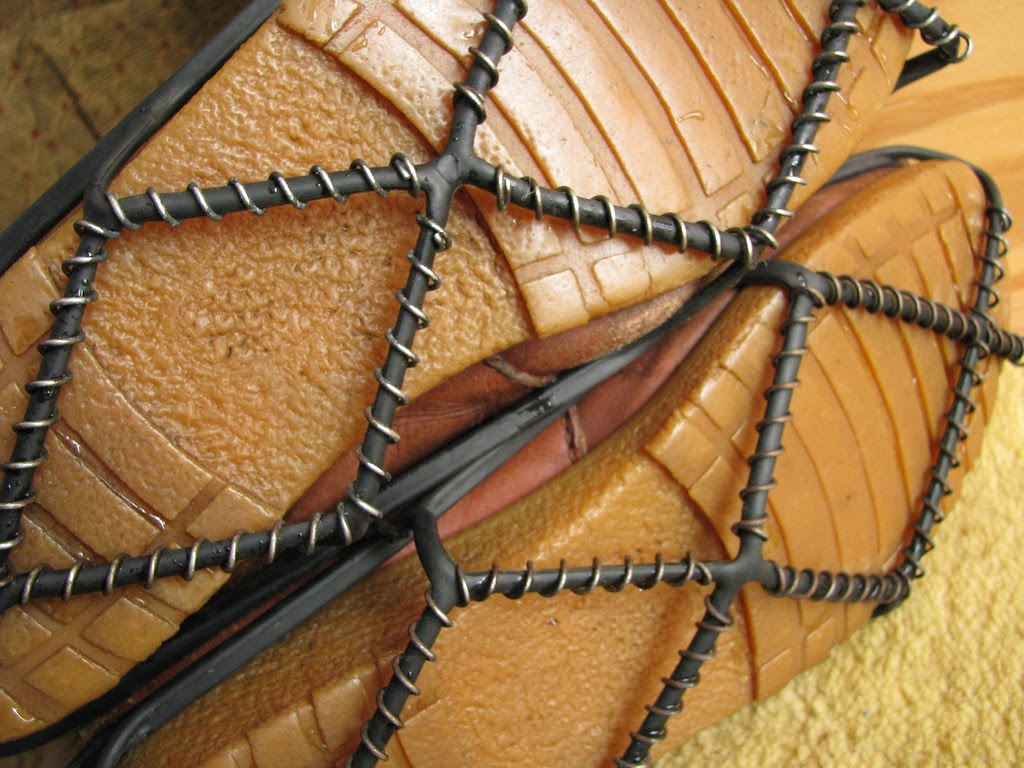 Ice doesn’t just make me walk funny, it makes me feel incapable and dependent, and I hate that.  When I got home, I immediately started researching and found that many people have had similar experiences.  There don’t seem to be many ways to combat this but one product that came with tons of glowing reviews was the Yaktrax.  I had thought of using something like this in the past and didn’t like the idea of needing another device to help me, but after this last experience, I’m going to be giving it a shot!

I originally wrote this for the Achilles International-Colorado blog in October, but I wanted to share it on here as well.

We were in the first quarter mile of a Monday evening Achilles workout in Wash Park and I turned to my running buddy Jessica and asked, “You know when I like running?”  She turned to me and responded, “When the weather’s nice?” “No,” I said, “I like running when I’m not running.”

That statement pretty much summed it up for me; I hated running. I tried to run when I was in middle and high school, but running on a stiff prosthetic foot that’s designed for walking is no easy feat. Not realizing what a big difference a running prosthesis could make, I designated myself as a non-runner and accepted the fact that I’d never be a runner like my mom who ran cross-country for Colorado State or my aunt who completed two Ironman Championships in Kona.

Then, in late 2010, everything changed when I got a running leg. I started running with my then boyfriend (now husband) and I couldn’t believe what a difference the new leg made.

I wasn’t doomed to be a non-runner for life, I just hadn’t had the proper equipment!

My excitement was short-lived, however, because I started having piercing pain in my residual limb about two months later. After seeing numerous unhelpful doctors who had never seen an amputated leg like mine before, I finally hunted down the surgeon who did my original amputation in 1986.

I was in luck because he was at a hospital in Pennsylvania and was willing to look at my leg, x-rays, and multiple other medical documents in order to provide a second opinion about what a doctor in D.C., where I was living at the time, had suggested as my best option.

It was determined that I had a neuroma (basically when your nerves bundle up into a painful ball and send shock waves of pain up your leg when pressure is applied to it—a situation that is inevitable when you wear a prosthetic leg) and I needed some bone shaved off the bottom of my tibia because it was quite sharp and causing my skin to be in a constant state of anger.

So, there I was, in my first year of law school and about to spend my Spring Break on Percocet and unable to wear my prosthesis for at least 2 months.

The next two years or so were filled with ups and downs as we struggled to find a comfortable solution for fitting my “new” residual limb. I struggled with new kinds of pain and it seemed like the surgery had only moved the sensitive places on my residual limb rather than eliminating the pain. I was frustrated that I had gone through the surgery and months of recovery without seeing any positive gain. I exercised less and complained more. It had a deep impact on me and I started to feel like I didn’t really know who I was anymore.

Fast forward to March of 2013. I had moved to Colorado and my friend Jessica convinced me to walk a 7K with her. I hadn’t attempted running since 2010 because I was afraid that the increased impact on my residual limb while running was what had caused the neuroma in the first place, but I knew I could walk that distance. The excitement of race day got to me and I decided right then and there that I wanted to give running another shot.

When I first started running, I ended up walking most of the time, but Jessica stuck with me and encouraged me to push myself a little more each time. I found Achilles and we started “running” with them consistently on Mondays. There are many weeks I would have skipped running altogether had it not been for Achilles. Knowing that I have a group of people who expect me to be there and support me no matter what really helps keep me motivated.

When I first started “running” with Achilles, I probably walked over half of the 2.5 mile loop around Wash Park, only running in short spurts because that was all I could handle. On a Monday Run in October, Jessica and I were exhausted from the Hot Chocolate 5K the previous Sunday so we decided not to push ourselves too much at the Achilles run. I could hardly believe it when we ran the entire 2.5 mile loop without a single walk break and we held a pace of 10:27 minutes/mile. After 6 months of consistency, I felt like I’d overcome some invisible barrier that was holding me back from being a real runner.

What’s even better than finally feeling like I can call myself a runner! My neuroma has not returned and my residual limb has started building muscle, which has actually made my prosthesis fit better. Rather than causing pain, running has actually decreased the pain I tolerate on a daily basis because of my prosthesis.

The bottom line is that I hated running for 6 months, but kept with it anyways because of the support and encouragement of my friends at Achilles. Without them, I never would have overcome that invisible barrier and I wouldn’t be able to call myself a runner today.

I run for the typical reasons people run (fitness and so I can eat more pizza), but I also run because there have been times when I couldn’t.

The highest ratings were found with the following goals:

By contrast, the following goals received the lowest ratings:

You can read the full article here.

These lists are not meant to be exhaustive, but a few of our members helped compile some ideas for questions you might want to keep in mind when choosing a Prosthetist.  The first question is aimed at things you might ask the Prosthetist, and the second question is aimed at what you yourself should keep in mind during the interview.  Please feel free to comment with additional suggestions.

What questions should you ask a Prosthetist during an interview?

(1) How many patients with a [insert your amputation level] amputation have you fit?
(2) Do you pay for referrals from a doctor?
(3) Are you certified? Through which organization?
(4) Where did you go to Prosthetic school?
(5) Why did you decide to become a Prosthetist?
(6) What do you do when you have a patient with a residual limb that’s extremely difficult to fit?
(7) How long have you been doing this?
(8) On average, how many patients do you work with per year?
(9) Would I be able to get a hold of you if something were to happen on the weekend?
(10) Can you tell me about some of the highlights of your career while working as a Prosthetist?
(11) What’s the average age of your patients?
(12) Do you have much experience working with patients who have other health issues going on in addition to their amputation(s)? Do you keep in contact with a patient’s team of doctors when this is the case? If not, are you willing to do so?

What questions should you ask yourself when choosing a Prosthetist?
(1) What is my gut feeling?
(2) Does s/he seem to respect me?
(3) Does s/he treat me like a child?
(4) Does s/he dismiss my concerns?
(5) Is the office warm and inviting? Could I stand to be here for long periods of time (we all know this is inevitable)?
(6) Do I get the feeling that s/he will be capable of putting my needs and wants before his/her own convenience?
(7) Does it seem like s/he understands and appreciates the goals I’ve set for myself? Do I believe s/he will help me achieve those goals?
(8) Do I trust this person to do what is right for me?